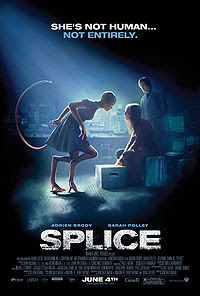 OK, just like everyone else when I saw the previews for Splice, the first thing that went through my head was Species

.  Some of the trailers even made me wonder if this was a sequel to the 1995 Natasha Henstridge sci fi horror film.  After seeing it today I cannot deny that their are similar themes, but for the most it owe mores to Frankenstein

.  Lancaster starred as the title character in The Bride of Frankenstein as well as playing Mary Shelley in the same film.

Adrien Brody and Sarah Polley star as Colin and Elsa two geneticists who have just successfully spliced DNA from various species to create a new life form.  Extracts from the creature have provided new veterinary drugs.  With this knowledge the two decide to splice human and animal DNA.  The resultant creature is named Dren and ages, both physically and mentally at an alarming rate.  On a bit of a gender reversal for most horror films, Polley's Elsa plays the role of mad scientist, while Brody urges caution.  Elsa ignores his reasoning and forges ahead.  Knowing that human cloning is illegal they plan on destroying the creature before it comes to term.  In true scientist credo they are doing it just to prove it can be done.

The creatures speedy development and will to live confounds there plans and the creature lives to be "born."  Brody is still anxious to destroy it, but the creature imprints on Polley.  Elsa meanwhile begins to see Dren as the child she has always been afraid to birth.  Dren meanwhile starts to develop some predatory habits and a taste for meat.  The two sneak her out of the lab and take her back to the farm where Elsa grew up.  Here Dren quickly reaches sexual maturity, while Elsa is tormented by memories of her childhood and a disturbed mother.  Tension builds between the three as Dren matures.  Before long we see Elsa exhibiting some of the same behavior as her mother.   Is Elsa replaying her childhood through Dren?  It soon seems that Elsa is more of a danger than Dren.  Or is she?

As Dren reaches sexual maturity she becomes enamored of Brody.  Before long to no one's surprise, Brody and Dren are caught making love by Polley.  At this point I was expecting the movie to shift into a new species, end of humanity theme but it doesn't.  The film  moves more into a horror vein with a creature on the loose segment.  Still there are no real scares, and both of the leads are so flawed it is really hard to care what happens to them.  The ending was no great surprise, in fact I was surprised it waited till the end for the development.


Probably my biggest knock on Splice is in its promotion. Once again it seems Hollywood really has no idea what the film is really about. Promoted as a horror film which it is anything but, nor is it truly a sci fi film, although it flirts heavily with that genre. Splice is more of a character study on Polley, and to a lesser extent Brody's characters. The ethics and morality of creating life is only touched on superficially. More time is spent dwelling on Elsa's messed up childhood and her attempt to be a good mother to Dren. Elsa's mother brings to mind the mother of Carrie White's mother from Carrie

.  The film would have been stronger if it had dove deeper into the mind of Elsa.  As it is it feels like we scratch the surface of an interesting story, then veers away.

There aren't enough scares to classify it as horror and the few "horror" moments we see all seem forced.  The whole poison tipped tail and predatory habits could have been dumped and the film would have been none the worse.  The twist, if it was indeed meant to be a twist, was so expected, that just like the ending, I kept expecting it all through the film.  Brody and especially Polley give excellent performances.  Polley oozes with barely contained insanity and you expect her to blow any second.  She does "lose it" but for some reason the filmmakers decided to bring her back to normalcy for no discernible reason.  Sane, crazy, then she is sane again.  The problem with her character is the same major problem with the film.  It cannot pick a side and stay on it.  It could have been an excellent science fiction film about the ethics of genetic splicing and cloning.  It could have just as easily been an in depth character study on the darkness of child abuse with a sci fi setting.  Instead it wants to be a little of everything.

Splice is not a great film.  While I don't feel I wasted my money totally, I do feel robbed for what could have been.  Some movies just seem destined to fail, this one had a chance to be great and was forced into failure.  My best advice for seeing Splice?  Wait for the DVD.