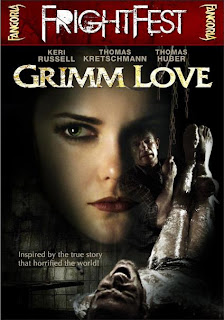 Grimm Love is based on the notorious German internet cannibal murders. Featuring a story within a story starring Kerri Russell as a student writing her thesis on the case. She researches into the pasts of the two en involved as we watch in flashbacks. Russell becomes more and mote attached to the case. She comes to sympathize with the men and wondering exactly what could drive people to become so lost that cannibalism was the only way they could feel whole.


She hears rumors that a video tape exists of the murder and cannibalism. Her curiosity overcomes her and she sets out on a quest to find the tape that plunges her into the underground world of online cannibalism forums. All the while trying to come to grips with the morality of the crime. IS it murder to kill someone who wants to be killed? Finally she receives a copy of the tape and we watch with her as the act unfolds.

Once again acting on the belief that less is more, the film never gets extremely graphic and is perhaps more disturbing because of this. There is blood, and while the actual act of emasculation is off camera it is none the less disturbing. There are scenes of simulated cannibalism which are not for the faint hearted or weak stomached viewer. 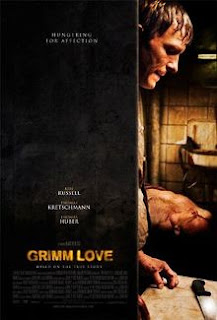 In the end Russell is sickened by the tape and destroys it. Russell spends the better part of the movie playing at a gothic lifestyle. She is fascinated by the case but coming face to face with the horror, she turns away in revulsion. We can only wonder if she still feels anything toward the characters, other than disgust. It has long been theorized that you can not observe an experiment without affecting it. Grimm Love seems to show that just as well we cannot view and experiment without being affected by it.

Grimm Love is available on DVD from Fangoria's Frightfest imprint.  The avergae horror fan might find it a bit slow and relatively bloodless but the content itself is very disturbing.  Considering this is more realisticaly based on a true story than most true horrors adds to that level of uneasiness.  Most of the facts of the case are presented pretty much truthfully, with the exception of the wrap around featuring Russell.
Posted by Lord Dixie at 5:59 PM