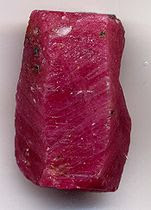 Ok so I am the worst in the world for getting ideas for new hobbies. These new hobbies might last for a few days or a few years but it seems eventually they all fall by the way side. Lately I have gotten interested in rock collecting. I guess it started with a trip to the Great Smokey Mountains last year. We stopped at one of the many "mine your own gems" places and had a short go. Actually I let my nephew mine, and I helped him. He found a couple rubies and a nice sized sapphire. It was fun thought that sense of adventure in not knowing what you will find. Still most of the mines there are salted with small gems but occasionally you do hear of big gems being found in the "native" unsalted mines.


I planned on going back to the mountains when I found a job and saved a bit of money. The job has happened but still haven't saved enough money for a trip to the mountains. Moving is expensive. The bug has hit me again and I have been looking at places where I might go and possibly mine for myself. There are lots of free and fee places to find gems and minerals. I have even started walking the beach looking for interesting shells and rocks. Meanwhile I am also looking for a rock shop I can visit in person and learn more about the hobby. Unfortunately the Mobile area isn't just over crowded with them. There are several listed in New Orleans but that is a 21/2 to 3 hour drive.

I found one listed a bit closer and decided to make a trip this weekend. Normally I work Sun to Thurs so I decided to go on Thursday. I was on call Thursday night but the shop ( that will go unnamed) was only about 40 minutes away according to Map quest so I should be able to make it there and back before my call started. Unfortunately the third shift worker called in sick so guess what? The call guy ( or gal) has to work. That was ok I can go Friday.

According to the shops website, they closed at five o'clock. I woke up at one and was ready to go by two-thirty. At this point I will say that I SHOULD have called ahead. Instead I head out with just a scrap of paper with the turns listed on them. Big mistake. there were only four turns listed so it should be simple. "Cough" never trust online maps. After only two turns and an hour later I realize something is not right. The street I am on is not on my list and I have not passed "Fernwood" my third turn. Not only that but I ma in a residential neighborhood, the street I am on has changed names to one not on my list, and I am headed south toward the coast. Before long I see the ocean and the bridge to Pensacola Beach. Obviously I have made a mistake somewhere. Biting the bullet I pull over and buy a map. Six bucks lighter I am scanning the city and still can't find fernwood. My position can be roughly determined by the large body of water known as the Gulf of Mexico over my left shoulder..

Finally I spot the street where the shop is and shocker its not that far and only a couple of turns. Still with almost two hours this should be a cinch. So what if I don't see a fernwood street anywhere near. A few minutes later I find my destination street and make a left turn onto it. Hmm this doesn't look like a business street. It looks residential and...dangerous. The cop car with the flashing blue lights parked at the end of the street convince me to turn and go back. Then I notice this is the "east" version of my street and I need the "west" version. Pulling over at a church a few blocks away from the cop car area I glance at the map again. The street the shop is on stops and starts several times.

I plot a route for the next section as time draws closer to closing time. twist and turns later I come upon the street again. This time is not a "east" or a "west," Probably not my street but I turn and, well, it is a pretty shabby neighborhood. I check my notes and see this block is about the 3200 block and going down as I drive east on it. I need the 3800 block. Back to the map I go. Finally another small stretch of the street to the west and lo and behold there is Fernwood, intersecting with the highway I had originally been on. How had I missed it?

I plot a new course along a short rote to get me there. Less than an hour till closing time but I have come this far. Not only that but I am very frustrated, hungry, and determined to find it. Eventually after a few turns and twists, a couple wrong turns I cross Fernwood and am on the street. On the right street and very close! Then out my driver side window I see the words "Rock Shop" painted on a run down shed like building, surrounded by a chain link fence. I must be close, wait, that run down shed...is the rock shop. At this point I am glad the fence gate appears locked. There is a sign out front that appears to announce they are moving to a new location. I was too disappointed to stop and check the address. I might also say I was a bit pissed that they had not updated their website with the new address.

I started back home tired and disappointed. I stopped and got some decent barbeque in Elberta, Alabama then headed on home. Doing more internet searching I found another possible rock shop. There was only the name which included "Rock Shop" and no description so it could be landscaping or music. This was however just a few miles from my house. I went by today and couldn't find it but the location is a large flea market so it could be a stall that isn't open all the time. I plan on going by again when it is warmer and more shops are open.

My plan now is to buy a tumbler online next week ( when another check hits the bank) and I am planning a trip to either Arkansas or North Carolina during the summer to dig for gems. I know this is a "horror" blog but doesn't wasting five hours of a Friday night driving in circles count as horror? Ah well I saw some decent architecture in P cola and I know how to get to Pensacola Beach now.

I'll let you know if I ever find that rock shop

Who knows if the hobby lasts over a week or two I might start a blog about rock hunting that I can neglect
Posted by Lord Dixie at 9:15 PM