Will the real Wolfman please stand up?

I really tried not to hate Twilight

.  I know it was a book written for kids, that broke into a mainstream audience.  It reached beyond the young horror genre

to millions of people who would never go see a horror movie willingly.  I can only assume some of these people have never heard of a werewolf

before.  That assumption is the only thing holding back my anger at Twilight

and its fans over the last few weeks.  Now I fear it is becoming impossible to have any respect for Twilight

or the majority of its fans.  I realize Twilight


First off it was the fan letter to Universal

accusing them of "stealing" from Twilight to make The Wolfman

.  Part of me still holds out hope that the letter was a prank, but knowing teens today, I can see it being real.  Then some twit on the Oscar red carpet refers toTaylor Lautner

as playing the most famous werewolf of all time?  Excuse all the fuck out of me?  That’s like calling Lady Gaga

the most famous singer ever.  Just because it is hot right now does not mean it will stand the test of time.  Let us take a quick look at the most famous werewolf of all time. Jakob Black

would not exist without this man.  Stephanie Meyer

would still be working at Captain D's if not for him.  Ladies and gentlemen,
Lon Chaney, Jr.

Maybe Lon doesn't pass the hawtness test of today’s text obsessed, barely can spell, can't locate Canada on a map teens but in the 40's he was considered a handsome leading man.  Not only that he could act.  He put a pathos and a sadness into his wolf man that has never been repeated in film.  The entire film was as much a tragedy as a horror film.  You tweens do know what a tragedy is right?  Or did you skip out on that part of class to go to the mall?  Most of the time honored werewolf mythos was created in that film, mythos which Meyer confidently threw out to make her goofy love triangle story.

 The 40's were a different time though.  A time when a movie didn't need big flashy effects.  A time when people actually paid attention to the story and the acting.  Now America is simply too stupid.  If a movie doesn't have big sparkly effects, fast cuts, handsome young barely legal actors and a non-sense storyline, it just cannot keep our interest.  Honestly Twilight is nothing but
a gimmicky, flashy, teenage angst filled piece of fluff.  Hopefully the 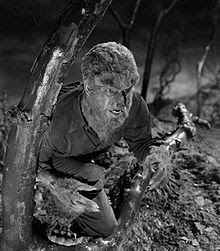 tweens that flock to it will someday realize this, but I don't hold out
much hope.

I am afraid the day of good movies, at least on the big screen are over.  I liked The Wolfman remake but it suffers from those same flaws, too much flash and not enough substance.  Much more substance than Twilight, but it can't compete with the original.  Will we ever see another Lon Chaney?  Nope. Will we ever forget him? Not true horror fans and true cinema fans.  It is our job, no our responsibility to keep his memory alive.  If your kids want to watch Twilight, make them watch The Wolfman first.  Take away their cell phone while they are watching it, turn down the lights and make some popcorn.  Maybe they will laugh at the special effects after being exposed to all the CGI

, but maybe they will jump once or twice.  Maybe they will shed a tear at the end.  If they don't leave me a comment saying " I told ya so," if they do then maybe there is hope for America yet.