Caught this last night on Netflix.  Vampire Girl vs Frankenstein Girl is not a movie for everyone.  However for fans of the Japanese over the top gore fest/body mod films like Tokyo Gore Police and Machine Girl it's a  ncie little treat, but not very substantial.

The story is confusing, illogical and really just isn't important anyway other than as a loose framework for gallons of cherry Kool-Aid blood and goofy gore. Monami is a vampire, who falls for a mortal.  No Twilight emo, or Let the Right One In sweetness here though.  Monami slips the studly Mizushima a chocolate treat with a special filling, her blood, which turns him into a half vampire.

Unfortunately, Mizushima is the reluctant boyfriend of Keiko.  Keiko is the vice principals daughter and somewhat of a bully.  Keiko's father moonlights as a Kabuki dressing mad scientist.  Guess what he is working on?  Hint, his hero is Dr. Frankenstein.  He acquires spare parts with the help of his sexy but psychotic school nurse/assisstant/serial killer.

When Keiko discovers Monami's secret, Vampire girl tosses her from the school roof.  Keiko's father is overjoyed to be able to experiment on his daughter.  He acquires the best parts from the school and rebuilds her as Frankenstein girl.  Which leads to the inevitable showdown.

Fans of Tokyo Gore Police will be mildly disappointed as this is a tamer film in comparison.  It is a bit lighter for the most part than Tokyo Gore Police or Machine Girl and a bit funnier.  The girls, especially Vampire Girl and the School nurse are very easy to look at which helps.  Mizushima is pretty much just window dressing for the girls and could have as easily been replaced by a card board cut-out or possibly Marky Mark.

The vice principal is one of the best treats of Vampire Girl vs Frankenstein Girl.  He is just so ridiculous in his full Kabuki regalia that it's impossible not to laugh at him.  Effects are what you would expect if you have seen Tokyo Gore or Machine Girl.  If you haven't seen then think cheap and cheesy. 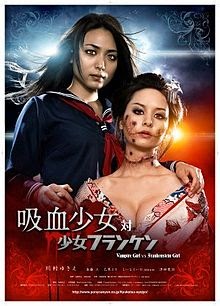