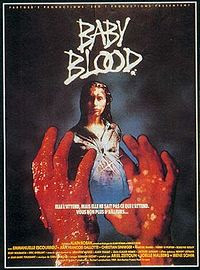 France has lately become a pioneer in the ultra gory, ultra violent horror genre. However those who think this is a new trend have probably never heard of Baby Blood. Baby Blood

, also known as The Evil Within, is a gloriously bloody romp released in 1990in France. However Baby Blood has only recently seen an uncut American DVD release. Along the line of other evil baby/demonic fetus movies such as It’s Alive, Baby Blood stars French beauty Emmanuelle Escourrou

as Yanka, the pregnant and abused wife of a circus owner. If the abuse wasn’t bad enough for Yanka, it is about to get much worse. A new leopard in the circus happens to be carrying a nasty little alien parasite. When the big cat dies the parasite decides to crawl inside Yanka. There the slug repossess her womb from the residing fetus. The fetus has a negative effect on her sanity and she flees town. The creature in Baby Blood craves blood and drives yanka to kill to sate it. The slug telepathically communicates with Yanka both comforting her and taunting her, driving her to more murders. After a bloody rampage Baby Blood ends with the creatures eventual birth.

Baby Blood is a true overlooked little gem which should be a cult classic. Anyone fond of the recent French gore fests such as Inside,

should definitely give Baby Blood a look. It has elements of comedy and sensuality to go along with its gore and Escourrou is not hesitant to strip off all of her clothes for the camera. The original American cut of Baby Blood, most commonly know as The Evil Within is heavily cut. The American dub of Baby Blood adds to the comedic moments but does detract from the over all impact. In 2006 Anchor bay released Baby Blood on DVD with both the US and French cut.

Now nearly twenty years after the release of Baby Blood a sequel has been released. Lady Blood stars Escourrou from the original French movie. With the recent over the top gore fests from France lady Blood should fit in nicely. In the sequel Yanka is now a mother and a cop, but she is haunted by her bloody past. The mob is vying for control of the city and a cannibalistic killer is on the loose. Could this killer be someone, or something from her past. Has the creature from Baby Blood survived and grown to adulthood? Is it looking for mom or calling for her? I can’t wait to find out.

Lady Blood was released in France in August of 2009 but so far it does not have a US distributor. The recent successes of French gore should bode well for Baby Bloods follow up and a US release should come sooner rather than later. Lady Blood is directed by Jean-Mark Vincent and co written by Escourrou. Look for it if you enjoy bloody horror and if you haven’t seen Baby Blood check it out.
Posted by Lord Dixie at 10:18 AM