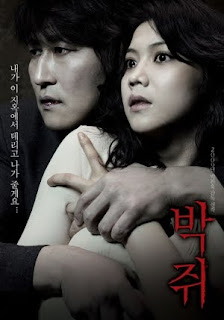 With the latest installment of the Twilight saga

, New Moon, vampires are all the rage in Hollywood and across America. People who would never go to a more traditional horror movie are rushing to the theater to see New Moon, choosing Team Jacob or Team Edward or swooning over the love between Edward and Bella. Anything Twilight is a hot commodity these days and Hollywood is taking advantage of it. While horror and vampire purists may avoid Twilight, they are also reaping some rewards from it’s popularity. Vampire movies are running in heavy rotation on cable and series such as Moonlight

and Nick Knight are being resurrected for TV, getting more exposure as everyone tries to cash in on the vampire craze. If Twilight has done no other good it has at least allowed these classic series to temporarily raise from the grave and seek a new audience. In the midst of this undead frenzy, a new vampire movie comes to us from South Korea.
Thirst is the newest film from South Korean directorChan-Wook Park

. Park is best know for his revenge trilogy, especially his second film in the series Oldboy

. Oldboy is a very violent but very beautiful film with an extremely disturbing storyline. Thirst