There were several people fishing when I got to the lake and the clouds opened up on me so I didn't get as many pictures as I would have liked.  Still I got a few. 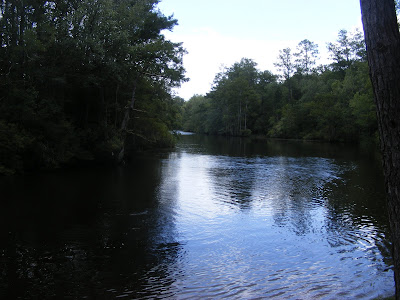 There were several boats loading on the ramp next to the pier which limited where I could stand.  I left my van on the paved area and walked down to the lakeside.  When the rain got bad I had to walk back or risk ruining my camera, phone and GPS.  I waited in the van for about 30 minutes but more boats were coming in and the rain showed no signs of stopping.  I finally gave up and started home.  The site is approximately forty minutes form my house depending on traffic so I will go back, most likely when the weather is cooler and there are fewer fishermen out and less chance of running into an alligator. 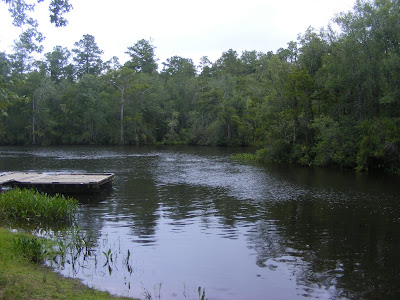 Best shot I could get of the pier from the film.  It's sad there was a good bit of liter around the area.  Several Styrofoam boxes on the ground that might have been picked up by the fishermen before they were left.  There was a trail leading around the edge of the lake.  I couldn't get a shot because of the fishermen who were along the trail fishing from the bank.  I think the trail was used in the film but it is overgrown pretty bad.
The lake is actually tributary of the Tensaw river that runs into Mobile Bay.  You can tell from some of the pictures it is more of a river than a lake. 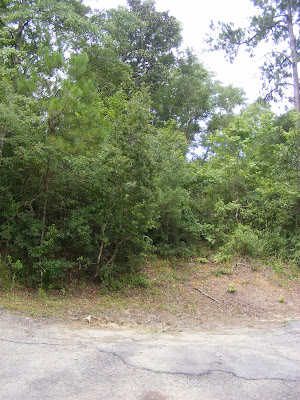 Here is a link to the site on Google Maps.  It is Byrnes Lake on Byrnes Lake Road in Baldwin County just north of Spanish Fort, about 45 minutes from downtown Mobile
Camp Crystal lake on Google maps
Posted by Lord Dixie at 12:52 PM