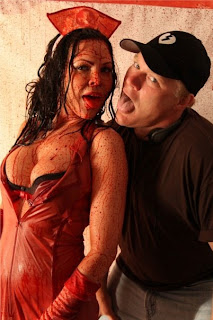 I started off liking this, then the victims were introduced. I know this was supposed to be a comedy, but when the people getting killed are so totally unlikeable through and through it doesn''t work. You need at least one or two that you like enough to hope they survive. It was torture waiting on them to hurry up and die. The Simple Life rip was way too simple.

The best part about this was the maniacs. Bill made a great Mayor Buckman. Lin Shaye as granny was hilarious, Ogre was much better as Harper than he looked in the trailer, Hucklebilly funny as hell. Then there was the Milk Maiden, what can you say about he luscious Milk Maiden played by Christa Campbell? You can say she didn't take her top off that's what. Sorry but swapping out the skinny Hilton wannabes and their little boobs for Christa is a no win. I hate to sound like a perv, and I guess she wants to grow beyond just being a pair of bare breasts but really, that's pretty much what her character was. She didn't even have a solo kill in this she was just background fodder.

I really wanted to like this, but I spent the whole movie waiting on Bill and Lin's scenes and Christa's boobies and there wasn't nearly enough of either. I think it would have been more fun to just leave off the victims and do a comedy of the maniacs on the road
Posted by Lord Dixie at 11:05 AM