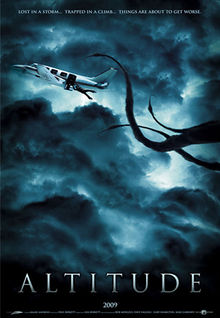 When I first saw the trailer for Altitude I was really excited. An airplane full of kids terrorized by a giant squid in the clouds. Dreams of Lovecraft filled my head. Come on, who else but the mighty Cthulhu, may he rise and devour us all, could be behind a giant squid in the sky?

Well apparently none of the filmmakers realized that this tempting trailer would get Lovecraft fans in a tizzy. Or they failed to realize that what really happens in Altitude would royally piss off those loyal Lovecraft fans. Well it pissed me off and left me crying false advertising. Maybe the stars just weren’t right for Altitude.

Apparently having a giant squid in the skies is just too ludicrous. Instead we a emoesque kid who projects his fear of flying (really) into a giant squid that devours his friends. Wow that’s much more plausible. Not only does he bring the sky squid into existence but also manages to force his fellow travelers to recite the dialogue from a comic word for word. A comic where people are being devoured by a giant squid. Yeah much more believable than the rebirth of an ancient god, may he slumber and dream of death.

Altitude has its cast of stereotypical teens, doing all the stupid stuff you expect teens to do. Climb outside a plane while tied to a rope, sure that’s something any teen would do right? It all ends with the revelation that dude has caused all this due to his angst over flying. Damn that makes sense. Also we find out that he probably caused a plane wreck as a baby. He really hates flying apparently. Off course we have to end it with a time travel, twilight zone, paradoxical ending that I wont even try and spoil for you.

It just amazes me that a whiny kid, too afraid to ask out the girl he is crazy about, has apparently never experienced anything worse than flying in his miserable existence. Come on, he was the punching bag amongst his friends on the plane, but he has never before been bullied enough to summon a cephalopod to wreak vengeance? Wasn’t the idea of psychic’s summing a giant squid done in the Watchmen comics? Wasn’t it also considered too out there for the film version? Hint to young filmmakers, if Zack Snyder can’t make it work, odds are you can’t either.

So if you haven’t heard of Altitude, just forget you read this. If you have and you are expecting Lovecraft, like the films wikipedia entry claims, you will be disappointed. If you never heard of Lovecraft or the great Cthulhu, long may he feast on our bones, and you are expecting just a wacky, Snakes on a Plane type monster fest, once again, expect to be let down. If you like PG horror, with pretty kids and a convoluted plot, you might actually like it. My best bet is to wait for it to show up on cable, where you won’t feel bad about the three bucks you spent on a rental.

I was advised to skip this flick, but I didn’t. Now I am passing that advice along to you. Especially the Lovecraft fans who might be reading this. Go watch Dagon again instead. Me, I’m just gonna sit here, drink a beer and wait for the stars to be right.
Posted by Lord Dixie at 6:21 AM