10 Vampire TV shows you should chek out


Vampires are a hot commodity today. Fans line up to see each new Twilight film and Twi-like TV shows such asThe Vampire Diaries

have started to appear. The fanged fiends are no stranger to the small screen however.

They may be more well known for their big screen shenanigans, but they have had their share of the small screen lime light. Here we attempt to list some of those TV series featuring the nosferatu.

- Described by many, both fans and non fans, as an adult version of Twilight. True Blood is based on the Southern Vampire Mysteries

by Charlene Harris and features Ana Paquin as Sookie Stackhouse a waitress who doubles as a telepath. In True Blood vampires have come "out of the coffin" and announced themselves to the world. The series uses the conflict between vampires and humans as a metaphor of racial and sexual orientation tensions in the south, and across America.

started out as a gothic soap opera before Jonathon Frid joined the cast as Barnabbas Collins. Looked at fondly by horror fans, Dark Shadows suffered from a low budget and shaky acting (and shaky sets) at times. Still it brought something to daytime TV that viewers had never seen before. The show spawned a remake in the 80s with better production values but handsome Ben Cross could not replace Frid in the minds of fans. A Dark Shadows movie is currently in the works from Tim Burton and Johnny Depp

- Based on the movie with Kristy Swanson, Luke Perry and Pee Wee Herman, the series took a more serious turn. Hailed by critics for its realistic portrayal of teens. The show starred Sarah Michelle Gellar replacing Swanson as Buffy. It brought stardom not only to its cast but to director Joss Whedon. Featuring a vampire-human love affair between Buffy and Angel

, and later Buffy and Spike, that predates Twilight's angst fest. Angel went on to his own spin off series. 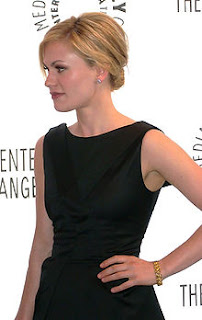