Avert your eyes Chillen, here there be tush,  See MORE of Holly at www.akahollyanne.com 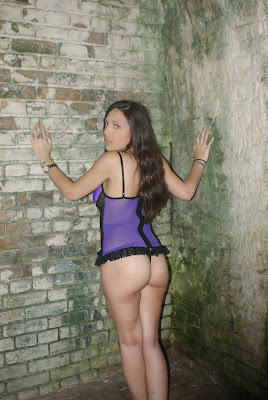 Beautiful lady and I will broach no disrespect for her.  Post any trash comemnts and I will delete them before you can spit your momma's tit out.  If you want to see the whole picture show me some blog love.  Minimum 3 comments here, in good taste, before I will even consider posting it, or three ad clicks.  More comments and I will post more pics.  Simple? damn skippy 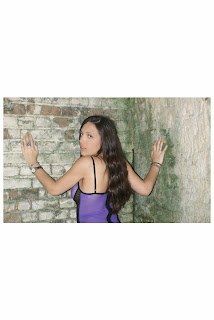 Come Die with the Middle Part


Horror fans know Ashley C Williams primarily from the Human Centipede. However some astute fans, and loyal (crickets chirp) readers of the Dark Domain might also know that Ashely is a co-founder of Mind the Art Entertainment, a collaborative arts and entertainment company in New York City.


Many of you might even remember my last post about their newest production, "Die:Roll to Continue". If you didn't catch it, (shame on you dammit, read my shit!) "Die" is an interctive comedy in which the audience, by way of rolling a six sided die, control the direction of the play. Reportedly there are 72 different versions of the play, die rolls at various key moments, determine which version of the play the audience gets.

After publishing the last post, I had a small chat with the beautiful and talented Ashley C Williams (name droppa) and she told me about a very special event happening April, Friday the 13. Mind the Art Entertainment along with Ashley C Williams present "Come Die With the Middle Part".


Come die is a special presentation of "Die Roll to Proceed" to celebrate her horror fans and hopefully get them to come out and enjoy the show. That night, which Ashley referred to as "Human Centipede" night, all tickets to the show come with a free beer (ok horror fans I said free beer, get on it!) Not only that after the show fans can hang out in the bar and enjoy drinks and Ashley will sign your memrobilia FREE OF CHARGE. That's right bring your own swag and Ashley will sign it for free.

Ashley will also have her own headshots and stills from the film for sale for the dirt cheap price of just 10 bucks. Come on you can't get the get a random stormtropper from Empire Strikes back for ten bucks now a days, and just try getting that short stormtrooper! Tickets for the show are going fast, I believe there were only 30 left as I am writing this and are 15 bucks a head (or middle part).


So come out see a great new play, meet the lovely, talented and super friendly Ashley C Williams and get her to sign your swag. Even better, show your appreciation for a lady who hasn't forgot her horror fans and buy some of her stuff.

Also go here for more information on the show
www.DieRollToProceed.com
Posted by Lord Dixie at 12:41 PM No comments:

Most horror fans know of Ashley C Williams from the cult horror, soon to be classic, The Human Centipede.  Not all horror fans know just how multi talented, and multi tasking she is.  The lovely Ashley, along with being an actress, singer, and dancer, is also one of the co-founders of Mind the Art Entertainment, and a member of the board.


Mind the Art Entertainment is, for those not familiar, a New York based collaborative arts and entertainment company.  There latest production is an unique and interactive play entitled Die:Roll to Proceed.  Die, is written by Joe Kurtz and directed by Christian de Gre'.  Ashley C Williams serves as one of the producers, along with director de Gre' and Emily Meier.

Die:, is basically the story of a man who is fed up with all of the wrong decisions he has made in his life.  So he makes one more decision to surrender his fate to random chance and the roll of a six sided die. Here is where the interactive part comes in.  At certain, pivotal points in the play, the fourth wall is broken and a member of the audience is asked to roll a die.  Depending on the number rolled, the play will then follow a preset path.

Due to the fluid nature of this, there are reportedly 72 different versions of the play.  The random die roll determines which version the audience will see.  This dependency on a random roll of the dice leads to a strange, unpredictable comedy the likes of which has never been seen before.

DIE: Roll to Proceed will play at The Red Room (85 East 4th Street) with two preview performances on March 30th and March 31st at 10:30pm. Officially opening on Friday, April 6th, the production will continue to play every Friday night at 10:30pm through October 19th. Tickets, priced at $15, can be purchased online at www.DieRolltoProceed.com. For more information, you can visit www.DieRolltoProceed.com.

Read more: http://broadwayworld.com/article/Interactive-Comedy-DIE-Roll-to-Proceed-to-Begin-Run-at-The-Red-Room-330-20120228#ixzz1pjjgnbSd
Posted by Lord Dixie at 1:11 AM No comments: