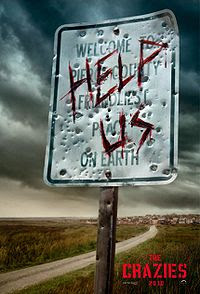 The Crazies is a remake of the George Romero movie. The Crazies is directed by Bret Eisner and starring Timothy Oliphant and Radha Mitchell. Normally I hate remakes and, well honestly I can't see that this one will be much different than the rest of the remake crowd. However, I'm not a big fan of the original. That may seem like sacrilege to some but I have only seen it a couple of times and it just doesn't strike the same resonance as Romero's other work. Since I really like both of the stars, Radha Mitchell has never let me down and I have fond memories of Oliphant from Deadwood so I might give this a chance

David Dutton is sheriff of Ogden Marsh, a picture-perfect American town with happy, law-abiding citizens. But one night, one of them comes to a school baseball game with a loaded shotgun, ready to kill. Another man burns down his house after locking his wife and young son in a closet inside. Something is infecting the citizens of Ogden Marsh...with insanity. The few still sane find themselves trapped: Sheriff Dutton; his pregnant wife, Judy; Becca, an assistant at the medical center; and Russell, Dutton's deputy and right-hand man. Forced to band together, an ordinary night becomes a struggle for survival as they try to get out of town alive.