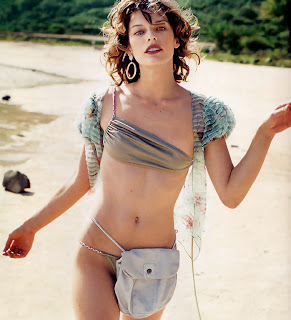 Well to be honest there is a lot wrong with the new Resident Evil Movie. The story is nothing special, the effects are hit and miss at the best and the 3-D can be distracting at times and just plain silly at others. Still I really enjoyed it. Does that make sense? As much as I rail about stupid movies, and decry the lack of intelligent film, especially in horror, I spend hard earned money to watch a sub par 3-D movie and then have the audacity to enjoy it? Well screw you guys I liked it.


First off I am a Resident Evil fan who really hasn’t played the games other than once or twice when the first one was released. Add to that that I am a Milla fan, due in most part to the first film. Now does it make sense? It gave me what I wanted another shot of zombie kicking Milla action.

Maybe one of the best aspects was stripping away Milla’s superhuman powers and just making her a human ass kicking machine again. Plus Milla was looking at the top of her game in this. She was stunning. Add to the mix Ali Larter as Claire Redfield who, in my opinion, looked even better than Milla and it is instant win for me. There was some dude playing Chris Redfield too, but really, do I care?

The bad guys ran the gamut from average reanimated flesh eater to zombie dogs, and some leviathan type dude with a massive axe. I am sure RE game fans are lambasting me for not knowing the character, but once again, who cares? He was freaking cool and the battle with him, Milla, and Ali rocked ass.

The CGI was ok for the most part and I say that because I can’t recall many moments when the effects really pissed me off. One effect which I assume was a miniature effect that was shot in 3-D was horrible but I will cover that in the bad stuff.

For the most part the 3-D was a negative and the film would have been better off without it. The coolness of the 3-D was mostly in the title sequences. Yeah it was that weak. There was one scene that almost made the 3-D worth it. When Alice (Milla) literally jumps out of the screen riding the shock wave of an explosion. Literally out of the screen, hovering in the air just over your face. This my friends was what 3-D was meant to be. Who can resist a face full of Milla?

Now the bad. The 3-D, during the action scenes there is so much debris flying toward you that it obscures the screen. The first time it happens the effect is cool, you really want to flinch to avoid it. It is repeated ad nasueum and it gets old really quick, especially when you realize you are missing the action due to all that debris. I want to see Milla, not a cloud of dust.

The scenes involving Milla’s plane just look amateurish. It seriously looks like a miniature tied to a string suspended in mid air. I can only assume that is how they accomplished the effect.

The only CGI effect that pissed me off was one I was looking forward too. Resident Evil: Extinction promised us an army of Milla clones fighting against the Umbrella Corporation. The film opens with this army of Milla, but damn. The effect sucked. It looked like basically the same shitty split screen effect that let Jethro and Jethrine be onscreen at the same time on The Beverly Hillbillies. Can’t we do better fifty years later on the big screen?

Lastly at the chance of being called a total pervert, there was no nude scene. Mow I accept this could well be Milla no longer being comfortable doing nudes. However her nude body added a touch of spice to the first two films. The idea of seeing her nude body in 3-D was a major incentive in shelling out eleven bucks for a ticket. I still could have dealt with this if there wasn’t the nudity tease. Alice wants to take a shower and surprise the survivors have a working shower. YES! Unfortunately they don’t have hot water. Double YES!! Milla then proceeds to take off her holster, wait for it.. And she is interrupted and then the damn zombies attack. Ah well.

So, my opinion. Resident Evil: Aftermath is not that good of a movie. If you are a major Milla and Resident Evil fan, there is a decent chance you will like it. There’s also a chance you won’t. There are plenty of flaws ad very few redeeming values beyond the hot leading ladies and well, a face full of Milla. Still I liked it, and was stoked to hear a fifth film will happen. Let’s hope Milla sheds her inhibitions and sheds her clothes. Nude Milla, cold shower, and 3-D, you do the math, but to me it equals total win
Posted by Lord Dixie at 5:31 PM