An Interview with Frazer Lee

I had the pleasure of meeting Frazer Lee several years ago in Hunt Valley Maryland. As with so many of my celebrity encounters back then, I was completely shitfaced when we first met. In fact I was shit faced most of that weekend. It was a fun time and we really hit it off so I picked up a copy of his short films Red Lines and On Edge. After watching the I became of fan of Frazer and consider him a personal friend. 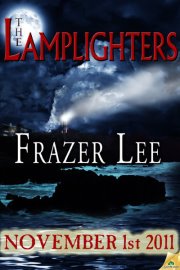 This month Frazer’s newest E book The Lamplighters was released from Samhain publishing. It was the number one book on the horror best sellers list when it debuted and is still doing good as of my typing. Frazer was nice enough to grant me an interview over Facebook. Don’t beat me up to bad, this is my first interview J.

Dixie: Tell us a little bit about The Lamplighters?


Frazer: The Lamplighters is my first novel for Samhain Horror and is about a young woman, Marla Neuborn, who gets her dream post grad job working on an idyllic island - but then discovers things are not quite so rosy as the job spec would have her believe!

Dixie: I understand Lamplighters actually exist, did you coin the phrase? Or was it already in use?


Frazer: A friend told me about the 'real' lamplighters, who are basically caretakers in places like Monaco where the super-rich go out to play. I then realized I’d seen the term used elsewhere in novels by Dickens and le Carre among others.

Dixie: I’m about halfway through with The Lamplighters. It started pretty damn bloody, but I have a feeling it’s going to get bloodier?


Frazer: Oh it just might get a little bloodier! I don't want to give spoilers but suffice to say life on Meditrine Island is no picnic, that's for sure!

Dixie: Any plans to adapt The Lamplighters for the screen?


Frazer: I would love for that to happen if there were any interest.

Dixie: Is writing an E book any different that writing a traditional book? (a different thought process) Was the Lamplighters planned as an E book from the beginning?


Frazer: Nope, a novel is a novel whether it is released digitally or in print - the novel is the form, the product is the format. The Lamplighters eBook released on November 1st and the paperback follows February 7th 2012.

Dixie: Doug Bradley of Hellraiser fame, starred in your short films Red Lines and On Edge, as well as being attached to Urbane. How did you first meet Doug?


Frazer: I'd seen Doug in his Hellraiser movies of course, and attended a 'Behind the Mask' talk he did at the British Film Institute, but didn't meet him in person until we talked about 'On Edge'.

Dixie: Red Lines was my first experience of seeing Doug on screen without makeup, other than a few scenes in the Hellraiser series. To me his performance was more chilling without the pins.


Frazer: I'm glad to hear you were digging it. He's a fine actor and there's more to him than pins and latex for sure.

Dixie: Is there any word on when Panic Button will be released in the US?
Frazer: No news as yet, but keep an eye on www.panicbuttonmovie.com

Dixie: I have this weird thing, that I won't buy an E reader. I think some of my friends are looking at me like I might be the next Unabomber? I just mourn what I feel is the death knell of "real" book? Do you think this is weird? I otherwise love technology, but I'm just afraid when books exist only as files they can too easily be redacted and edited by big brother?


Frazer: Not weird at all, i don't own an E-reader device either, i love the tactile experience of a book, the smell of it. On those occasions where I’ve proofread a manuscript or a screenplay i have always, without exception, printed the thing off and read it that way. I write using a combo of handwritten notes & typing on my laptop but i suck at reading on-screen.

Dixie: Book burning have always been a tool of oppression and a rallying call for freedom. A file erasing party just doesn't have the same pizzazz, don’t you think?


Frazer: You make a good point there. In between that and the whole Wikileaks thing there's maybe a helluva horror/thriller story idea :)

Dixie: What is your next writing project? Anything in the oven now?


Frazer: Well, i have the movie novelization of 'Panic Button' coming out soon. The producers of the movie commissioned me to write it based on the screenplay. Other than that I’m lining up a couple of screenplay deals and am working on another horror novel.

Dixie: Pendragon rising was probably one of my favorite of your short stories. I love historical horror like Chelsea Quinn Yarbarough (sp) and of course Anne Rice. What's your take on this subgenre and do you plan on doing anything similar? Adam and Eve meet Cthuhlu maybe? Noah vs. The Kraken?


Frazer: Thanks! I'm glad you enjoyed that story, i really enjoyed writing it, it was one of those ideas that just buzzed around in my mind for ages and wouldn't go away. I love historical horror too, although to be accurate in the case of the King Arthur tales, mythological horror might be a better description. I'd love to do more and i do have another of those ideas that just won't go away but i won't mention it in case i scare the muse away!

Dixie: Remakes are all the rage in Hollywood, but also face a backlash from hardcore fans. If offered the chance to remake a horror classic would you do it? My personal feeling is, don't blame the guy getting a big break, as the film will get made anyway if the money is there. However I do get a bit angry when an established star desecrates a classic?


Frazer: Wow that's a big can of worms you've opened there Allen, i hope you're hungry :D I think it is the duty of indies to come up with the new ideas, you know? The new potential franchises, the new talent for the studios to then leap on. But it doesn't always happen like that, sadly. The studios aren't meant to take risks, it's not in their remit to do so, so you kinda expect them to churn out endless sequels and remakes. But the indies are only limited by the power of their imagination. Now, a few of the indie kids are remaking horror classics and i think they should maybe stop because they are just playing to the crowd. Horror fans and the industry are looking to these guys for innovation, you know?

Dixie: If you could remake any film what would it be? or would you rather stick with original content?


Frazer: I can't think of a single film I would want to remake. I have several feature length screenplays I would LOVE to make though

Dixie: I think a lot of the rage at remakes from real fans, is that so many original projects never see the light "cough" Urbane "cough", and yet Hollywood wants to tinker with classics for a cheap buck. What's your feeling on this?


Frazer: I've learned over the years that it is in fact very common for dozens of great projects to never actually get made. I've also learned it is called the movie "business" for a very good reason!

Dixie: How hard is it to get a project to the big screen?


Frazer: Oh, it's incredibly hard but it all depends on your intent. If you wanna make a handheld phonecam zombie gorefest with your buddies then that's pretty easy to follow through on. If your intent is to pay people, shoot in a certain way, tell a big story...prepare to suffer because it is going to be a long hard road!

Dixie: Ok, I think that should wrap it up. I could honestly go into a dozen tangents think, but I need to finish the Lamplighters and my other dozen open projects. Any last thoughts?

Frazer: Only to say a big THANK YOU Allen for the chat, it's been most enjoyable. And anyone reading this, please say hi at http://www.frazerlee.com/. I'm also on Facebook at http://www.facebook.com/AuthorFrazerLee and on Twitter: http://twitter.com/frazer_lee

Thanks Frazer and best of luck on your future projects.
Posted by Lord Dixie at 7:54 PM