Watched The Chaser and most of a british horror film called Splintereed last night.  Still no luck at getting my hands on a copy of House of the Devil. I tried two blockbuster, both had only three copies and all rented out, and two Walmarts.  The film is listed on Wal-Mart.com so apparently they aren't boycotting it.  Best Buy.com also has it listed but didn't have time to get to the local Best Buy before closing.  Guess I may have to break down and order it online 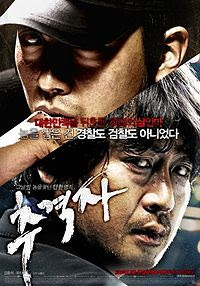 I wrote a review for the Chaser, and submuitted to Associated Content.com, since I am now publishing most of my stuff there.  Unfortunately they haev a long submission progress and it migth be a couple of weeks before it gets published.  I will link to it and probably republish here one it is approved there.  The Chaser isn't really a horror film but its damn good and damn gory. Check it out
Posted by Lord Dixie at 11:59 AM

Email ThisBlogThis!Share to TwitterShare to FacebookShare to Pinterest
Labels: House of the Devil, The Chasrer