Lindsey Vonn sexy pictures draws criticism! What the hell is wrong with people!

I mean come on!  Its not like she is naked or even showing nay skin.  True she is wearing a sking tight suit but isn't that what skiers weear?  True, she is bent over in what could be called a sexy pose, but isn't that a basic position for skiing?  Whats the real complaint that Lindsey is beautiful and to be honest hot as hell?

Should women athletes be hairy and look like lumberjacks? Jeexz people get a fucking life. Popel say that the picture is degrading and lowering her to just a piece of meat but in truth she is doing more for womens rights than most of the protesters.  She is out there being successful, being popular and yes, being beautiful.  She can compete and probably can outsky most male competitors.  Now if she were naked or barely clothed it mgiht be a bit different, but really this is ridiculous 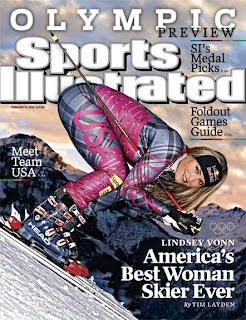