Hobo With a Shotgun

Hobo With a Shotgun 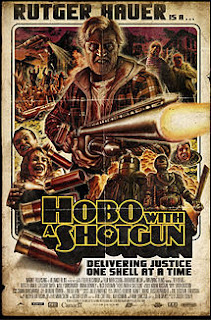 All the advance word on Hobo With a Shotgun likened it to Grindhouse cinema. Being a fan of the grind I was eager to check it out. I got the chance to meet with Hobo director Jason Eisner at Texas Frightmare Weekend. Coming home I was even more determined to see the film. Luckily the film was out on VoD and I finally got the time to sit back and watch it.

Rutger plays the titular anti- hero. It is a bit of a different role than I have ever seen him in before. He plays a world weary hero, who sees too much and realizes he can’t just turn away anymore.

The film starts off slow. Almost too slow. Don’t get me wrong there is loads of violence all garishly shown in full detail. The violence is mostly cartoonish, over the top and brightly colored. Still the film just never seemed to get me going. That changed once the Hobo finds the shotgun.

With gun in hand the random gore turns into a symphony of brutality and Hauer conducts it with aplomb. Bad guys are blown away in rapid succession including a pedophile Santa. Rutger delivers one liners that would make Clint Eastwood blush. In many scenes he seems to be channeling Dirty Harry.

The violence is so over the top it isn’t hard to watch. People overly sensitive, especially to violence toward children may have a problem with it. It’s no Hostel, no A Serbian Film, and in reality it’s not even a Grindhouse film. Hobo With a Shotgun is more akin to the video nasties of the VHS age in the 80s. Think Troma, especially The Toxic Avenger, and some of the gorier Full Moon efforts.

It isn’t a happy film. It’s not a feel good film. It is a movie to watch a good guy who’s had enough slaughter cartoonish bad guys. It is a fun movie, but a fun movie for people who enjoy comedic, over the top gore. I liked it. Does that tell you anything?
Posted by Lord Dixie at 4:11 PM