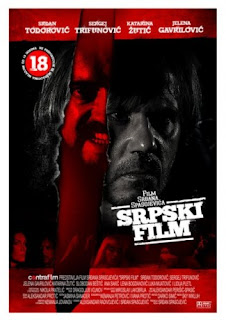 Where do I begin with A Serbian Film. Usually I have a review pretty well mapped out in my head before hand, but with A Serbian Film, I’m pretty much winging it. I like to say if you haven’t heard of A Serbian Film, then you haven’t been listening. It is hands down the most controversial film in recent memory. It is also rapidly becoming one of the most notorious films of all time. All over the internet “which is worse” comparisons are cropping up with other notorious films,

A Serbian Film is a hot button film, bound to stir debate and tempers. Just taking a side on the controversy surrounding it is bound to garner hate mail. Actually saying you like it will get you labeled a deviant and garner you strange looks. I have been leery to even tell friends what it is about for fear of strange looks because I even know about a film like A Serbian Film.

I have wanted to see A Serbian Film since I first saw the trailer. At the same time I have feared seeing it and even hated that part of me that wanted to see it. All my instincts told me A Serbian Film is a dangerous film. Still I felt remiss as a movie fan and reviewer to not watch it. I also felt like a coward. So last night I bit the bullet, found a safe place inside my brain to retreat to if need be, and watched A Serbian Film.

Usually I don’t like giving spoilers. However in the case of this film I think not giving at least some spoilers is very negligent. It also makes it near impossible to give an honest review. Even though I will always wonder exactly the effect this film would have had on me if I had gone in blind, there are people who deserve a warning. The subject matter is that extreme. A Serbian Film contains, but is not necessarily limited to, rape, murder, gratuitous nudity, incest, necrophilia, pedophilia, torture, infanticide, and suicide. Almost all of the violence is sexually related. This is no Hostel, it is much more brutal. However it is not just torture porn.

Much of the discussion of A Serbian Film resolves around whether it has the right to exist as film. There is so much controversy over the legality that you can't get a debate about whether or not it is a good film. Honestly right now I don’t feel comfortable saying I like A Serbian Film. However it is a film with a story. It is not shock exclusively for shock value. I have heard many arguments about the meaning of A Serbian Film. Social comment on the genocide during the break up of Yugoslavia, slap in the face to Serbian film censors. At one point the “director” of the film inside A Serbian Film states that pornography is the only hope of the Serbian people. This was the clearest message I got from A Serbian Film. That the Serbians are a people who have been brainwashed and turned in to savages. All the while being taught that their neighbors are less than human and fit for slaughter.

The protagonist Milos only has one escape from his struggle though pornography. To debase and abuse those who are less than him. Vukmir, the director, tells him the women are drug abusers and whores. Are these echoes of what the Serbian people were told? The most infamous scene seems to be stating that everyone is born a victim. The final scene suggests that we cannot escape, even in death. This was at least what I took from the film. Maybe if I was more familiar with the war and genocide I would have gained more from the film. I would love to know what the reaction of the Serbian people would be to the film. All I can go with is what I saw and the few comments I have read from the director. This is, in my opinion the main failing of A Serbian Film.

I am accustomed to looking deep into a film for meaning. Sometimes I succeed, sometimes I fail. In A Serbian Film, the director takes it and throws it right in the viewers face. Forcing us to take in all the ugly, all the hate and all the desperation, not allowing us to look away. However in doing so he blinds us, all we can see is the brutality. All we see are the images that are burned into our minds. Even with forewarning it was hard to watch the scenes. Not just the most infamous scene, or the other scene which was also horrible, but the whole movie. So many disturbing scenes don’t get mentioned due to the extreme notoriety of THAT scene.


For those who don’t know here is a quick synopsis. Milos is a retired porn star who is struggling to support his family. He is approached to star in a artistic pornographic film that will enable his family to live comfortably. There is no script but the camera will follow him as he has sex in various situations. Situations that grow more violent and deviant with each act. It spirals quickly out of control as Milos realizes he is helpless to escape. Actually before Milos realizes it is out of control, it is already tragically too late for him and his family. When he tries to escape he is drugged. He wakes up bloody with only faint and confusing flashes of what has happened. Retracing his steps, and discovering footage of the missing day, we discover with him just how tragic
.

I wont spoil the ending for those brave enough to watch it. However for those who still might be on the fence, I am about to release spoilers. Spoilers that are readily found in most discussions of the film. First off, if you have not heard Angel Sala the director of the Stiges film festival in Spain has been arrested for showing A Serbian Film. Under Spanish law, and under s strict interpretation of American law, A Serbian Film could be illegal. The laws in question could define A Serbian Film as child pornography. There is no actual sex involving children but the law provides for simulated sex with minors or persons portrayed as minors. While A Serbian Film does contain simulated sex with person, (or objects, more later) portrayed as children, it should be noted that many other mainstream films contained implied or simulated sex with minors. Movies such as Animal House, Hound Dog, Friday the 13th, Old School, Lolita, Pretty Baby and many others. Why single out A Serbian Film? Most likely due to that one scene being so notorious. That coupled with a prosecutor wanting to make name for himself.

So about the scene, here without further ado are the spoilers. The most notorious scene is a scene where a male has sex with a newborn baby. It seems really stupid to say the scene is not gratuitous but considering the possibilities, it could have been worse. No real baby is in the scene but a mechanical crying doll, and the “rape” is filmed from behind the man as the child screams. Still it is hard to watch, hard to stomach, and hard to cope with. That is the scene with the most press, there is another scene that was just as hard if not harder to watch which involves the anal rape of a five year old. Even though the child is not seen during the scene, the utter realism of it was disturbing beyond my ability to put in words. If these were the only two scenes A Serbian Film would still deserve to be the most talked about film today, but there are more. Scenes of children watching sex scenes, people forced to have sex while watching videos of children eating ice cream, and a character having sex while watching his nephews birthday party on video, presumably “getting off’ on the video.

I can honestly see people having a problem with this film. I have problems with A Serbian Film. It left me feeling physically ill and I doubt I will ever watch it again. It is far and away the most disgusting and disturbing film I have ever seen, and I hope it keeps that record. Still it is far from pornography. There are many more films that are just excuses for gore, sex and shock that I would label as closer to pornography. A Serbian Film has a message, even if the director failed to deliver it clearly. I think the excess that make it powerful overwhelm the message. Did I like it, damn that’s not something I can say right now. It did draw me in, it did make me feel for the characters. I had a hard time liking Milos, but had a hard time hating him too. Maybe that was the real message, that sometimes, despite our best intentions, life just fucks us over. If you decide to watch A Serbian Film, then don’t blame me.