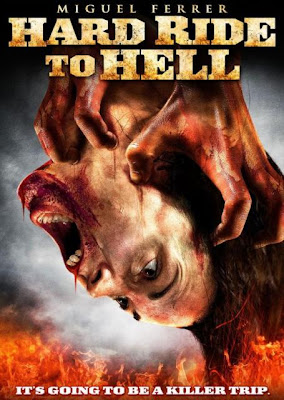 I am going to come straight out and admit that the only reason I watched this film was because Katharine Isabelle was in it.  I have been a little bit in love with Katharine since I saw her in Ginger Snaps.  Seeing that it also starred Miguel Ferrer gave me hope it might be decent. Reading the synopsis I expected an updated, more visceral version of Race With The Devil.  What we get is just kind of a  mess.  Instead of inspiring fear in me, the satanic bikers mostly make me want to laugh at them.  The dialogue was uniformly bad.  It might have made a decent horror comedy if they had pushed it a bit, and if the humor had been intentional.  The plot was pretty simple, big bad satanist wants to make a baby. Innocent campers witness the bikers ceremony and chase ensues.  Traveling knife salesman and former Special forces guy comes to the rescue.  Everyone heads to a run down church for the final showdown.  Of course there is a twist that Ray Charles could have seen coming.  The movie isn't all bad though.  In fact I can think of exactly two good things about it.  Katharine Isabelle is beautiful and even though she has limited screen time, she makes it through most of the film.  Not that her character is anything special, but I won;t blame her for that.  The other is that Bob the knife salesman is a fun character.  Not fun enough to save this mess, but fun and likable.  Should you see this film?  If you are a Katharine Isabelle fan, give it a go.  If you are a Miguel Ferrer fan, you might want to pass it up or risk damaging your opinion of his acting skills.