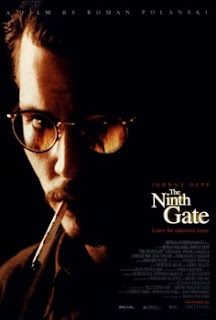 From director Roman Polanksi and starring Johnny Depp, The Ninth Gate revolves around Depp playing Dean Corso who is basically a bounty hunter for rare books.  Frank Langella stars as Boris Balkan a wealthy collector who hires Depp to find a rare and powerful book, reputed to be written by the devil himself.  As he delves deeper into the satanic underbelly of Europe's elite, Depp gets drawn deeper into the dark side himself.  The idea of forbidden books and films that hold a power of their own has always been a popular subject with me so I admit to being a fan of this film.  I also am  a huge Johnny Depp fan and he plays the sleazy book finder  Dean Corso with his usual gusto.  The problem with The Ninth Gate is that it is just so slow.  The action is few and far between and scares are non existent.  the best parts of the film are Depp and Langella and the fact that Polanski doesn't have time to have sex with thirteen year old girls if he is busy directing.  If you go in expecting a real horror movie you will most likely be disappointed.  If you want a  fairly intelligent film or just want to indulge your Depp fix, then you might enjoy it 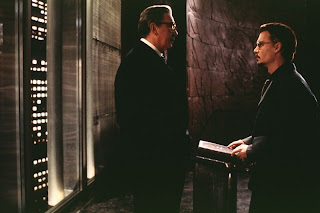