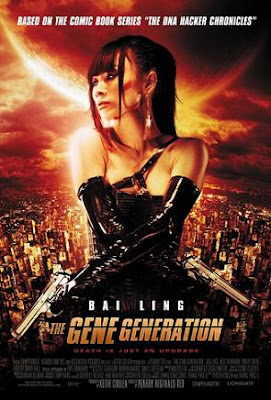 Gene Generation- Pretty bloody for a sci fi film and actually had a few horror elements. The plot was confusing as hell so lets just throw it out the window and say some people were looking for stuff someone else had, and some other people wanted some other stuff, then the same stuff etc, etc. Mayhem ensues.   Bai Ling's acting, well probably the only thing that kept reminding me she wasn't a cardboard cut out was the six foot long nipples, that she showed in a few scenes. Nice but a bit of overkill on mother natures part. The thing I liked was the backgrounds which they didn't bother to make too realistic and gave it a steam punk kind of look. A lot of the architecture was very gothic and dark. You could have easily slipped in a cult of Cthuhlu and no one would have noticed. Speaking of the one who lies not dead, but dreaming, there were a shit load of tentacles in this film. Sprouted by a main character and used to kill. Its a mixed bag you might like it if you can just admire the scenery ( including Bai's nips) and gore but don;t expect much story wise.
The film also stars Parry Shen from Hatchet and Faye Dunaway