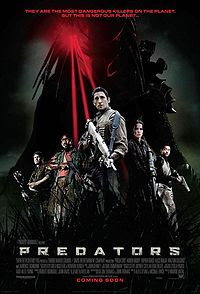 Ever since I heard Robert Rodriguez was involved in a Predator project I have been excited. The synopsis and cast list for the film did not lessen my excitement. While I wasn’t familiar with everyone in the cast, Adrian Brody is one of my favorite actors. Add in Danny Tejo and Walt Goggins, two seriously underrated actors and it was pretty much a must see for me. Then add in two stunt men with an impressive resume, Brian Steele and Derek Mears as Predators and oh yeah, Topher Grace.


I was a bit put off when I learned Rodriguez was not directing the film. Still I was determined to watch Predators. Throwing away Predator 2 and the Alien vs. Predator series, the film acts as a direct sequel to the original Predator with Arnold. In it a group of killers, the worst of the worst, awaken on a strange plant and find themselves hunted by an invisible force. They come to realize they are on a hunting preserve, eventually coming face to face with the Predators.

Watching the movie Predators, probably the first problem I had with it was Adrien Brody. Like I mentioned earlier, I love Adrien Brody’s work, but I just could not see him as a tough guy. I can buy him as evil, even as sleazy, but I never bought his tough guy act in Predators. He seemed to take control of this group of killers way too easy. Effectively playing the Arnold character from Predator, his smirking and tough guy stares just didn’t replace Arnold’s commanding presence.