The Last Exorcism: best possession film since The exorcist 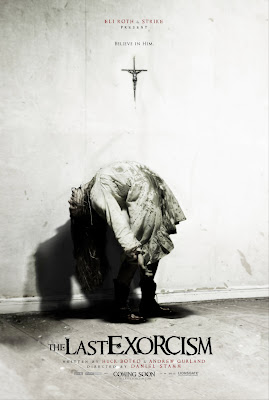 August 27 horror fans will have to decide between he new Piranha 3-D remake or a new film from producer Eli Roth, The Last Exorcist. The last Exorcism is the latest in a long line of films dealing with demonic possession. Most of these films have not come close to the original The Exorcist from 1973.

Eli Roth is best known for directing the films Hostel

and Cabin Fever. The Last Exorcism will be directed by Daniel Stramm. Stamm is a relative newcomer to the horror genre but from the looks of the advance one sheet poster he will soon be well recognized. The poster can be seen at the official movie site and features a young possessed girl, bent over in an impossible position.

The plot concerns the Reverend Cotton Marcus, a fundamentalist preacher who has made his living by performing exorcisms. Feeling remorse for his past sham exorcisms, he agrees to one more exorcism. He agrees to have the exorcism filmed and plans on outing himself as a fraud for the camera. Arriving at the farm of Louis Sweetzer, he expects to find just another disturbed religious fanatic, but instead finds a true evil force possessing the farmer's daughter. The Reverend Marcus must find a way to over come his own doubts, and guilt, to save the girl.

While Stramm is a relative unknown, the German director does have four films to his credit including A Necessary Death

in 2008. It premiered at SXSW in 2008 and later won the audience award at the American Film Institute.

Roth is well known to horror fans. With Cabin Fever

,and even more so with Hostel, he helped usher blood and gore back into the theatrical horror movie. Roth being attached to The Last Exorcist would seem to guarantee it a R rating. The film is rumored to be very visually disturbing with very startling and realistic imagery. The film's tag line "believe in him" is chilling in its possible implications.