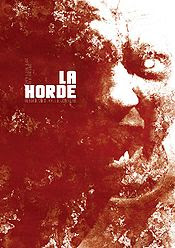 The French zombie movie The Horde gets a Us release date. Upcoming horror movies reports IFC films will be releasing the Horde for a limited theatrical run in August and then it will go to DVD.  The French have a way with on film brutality that American directors have yet to successfully copy.  This looks to be a gore fest.  I'm not a big fan of fast zombies on a whole but if the story is good, I will forgive them for speeding up the dead.

North of Paris. In order to avenge the murder of one of their own by a group of ruthless gangsters, four corrupt cops go on a rampage in a condemned building serving as the mobster's hideout. Now trapped, the officers are about to be executed when the unimaginable occurs: hordes of rage-fueled zombies invade the building, savagely attacking everyone. Unexpected alliances are made when their lives are threatened by the unthinkable.